It's a testimonial from a friend of mine, Dave.

The ​biggest benefit of coaching a friend is ​you know their lifestyle inside out. In Dave's case, I was never going to be able to simply tell him to stop socialising, or having a pint or 10 at the weekend.

So how ​did I get this beer-drinking, pizza-eating, chain-smoking specimen of a man to achieve his goals? 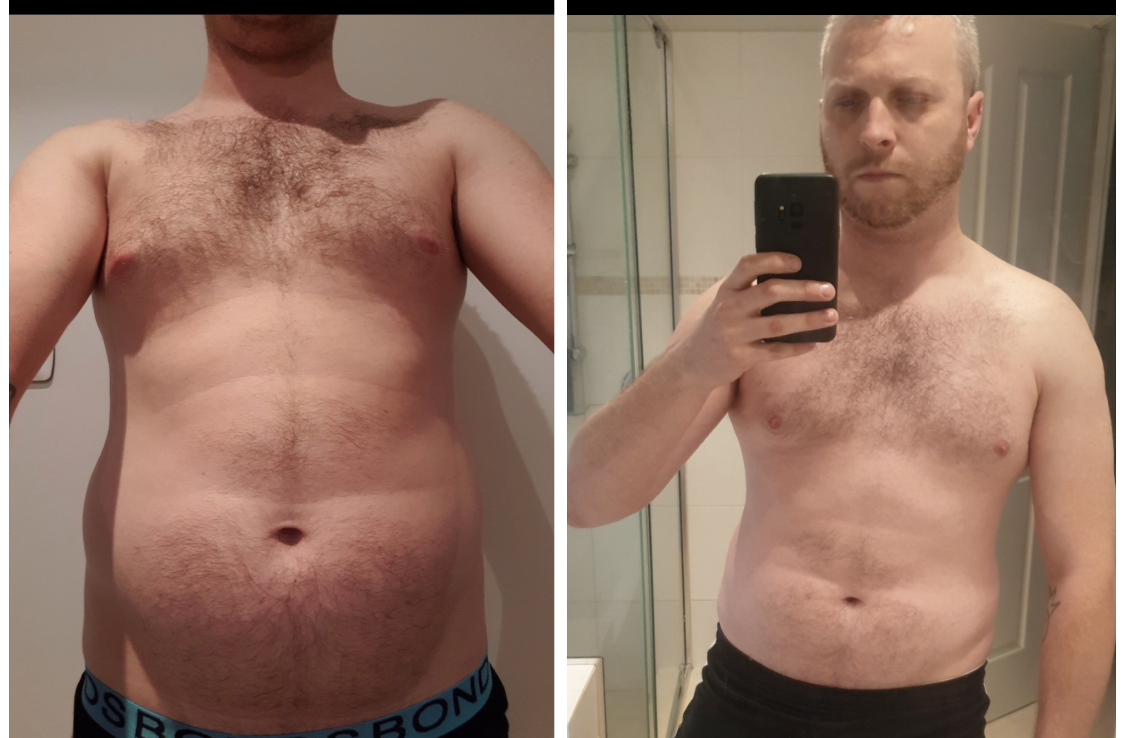 First and foremost, as with anyone, HE committed.

He knew I had launched my online training program, and he knew that at some point, he really should invest in his health. I take no pleasure in saying this, but I had genuine concerns for his health. ​So I was delighted when he got in touch.

​Some people commit on impulse. Some commit because there was a special offer. Some people don't even know why they're committing to a health and fitness program. I knew that when Dave got in touch, that he was serious. Something had 'switched' for him.

So knowing Dave had no experience whatsoever in the gym, it was all about setting some solid foundations early on.

​On my JEDPT app, my workouts all come with clear video demonstrations of exercises, and an eBook that details how to structure your workouts for optimal efficiency.

​But I encouraged Dave to get a PT session with a trainer at his gym to really help him get his technique spot on before he started tackling my workouts. ​*Note - he chose the hottest female trainer at the gym, naturally!

​Dave will be the first one to admit he was nervous and intimidated by setting foot into the gym. No shame in that. Particularly as he was training in the gym on the Gold Coast where stringers and fake tan is a membership requirement.

​When you begin an exercise regime, particularly if you are new to the gym, you may think that more is better. But there lies the issue with why people struggle with weight loss. You have to be able to stick to a program for long enough to see the results you desire.

What do most people do when they want to lose weight? They go all-out, training as much as they can, eating as little as they can, and then suddenly after a few weeks they realise they can't sustain or adhere to the program.

​So my FL3 Novice workouts were ideal for someone like Dave. We set him the goal of doing 2-3 a week along with some football training. Nothing magical. But easy to adhere to.

Every check-in, I'd make sure he was comfortable sticking to the workouts. He was. A few exercises weren't as easy as others, but progress was being made.

Fast forward 6-8 weeks later. The man who had never stepped foot in the gym before, was now getting pissed off when he missed a workout! At that point, you KNOW someone has made exercise part of their DNA. A part of their lifestyle.

I was fucking buzzing. People were telling him they noticed differences in his appearance, his energy etc.

But to repeat. HE committed.

​I have numerous people contact me weekly asking for advice, asking for 'diet plans' etc. They are so close to making that leap. The leap that Dave made. As he said in the video above, "Just do it".

​He experienced all the emotions that many people go through too.

The intimidation factor of stepping into a gym first time. The fear of judgement for being overweight. The confusion of not knowing what the f**k to do to lose weight.

​I will be shocked if Dave doesn't continue his 'new-found lifestyle' now.

Nothing above is 'sexy'. No fad diets. No excessive training or cardio. No stopping him from socialising. Just sustainable and adherable systems in place to get to him to a much healthier position 8-12 weeks later. No '30-day fat loss challenge'.

​And that, is all he needed.

It's what all of us need.

So be like Dave. Do the simple shit, and do it often enough so it becomes a habit.

​Dave also shared these words regarding his journey..

"When I quit smoking last year I figured that if I could do that I could do anything. Ever since I was old enough to drink in pubs underage I've abused my body with booze, drugs and shit food with little regard for my health and fitness. Quitting smoking was the trigger for me to pull my finger out and get myself in shape. After years of abuse and neglect I set myself a simple target - get myself fit enough that I could play football again without having a cardiac arrest every time I ran for the ball. I've gone way past that now.

At the beginning of the year I started playing 5 a side again and signed up for the gym that had been built conveniently across the road from my house but once I got there I was completely overawed and had no idea where to start and what to do. Around the same time, my good mate Jed was releasing his new fitness programme which was aimed specifically for people like me - people who wanted to get fit and didn't know where to start but at the same time weren't going to completely change their lives and become an overnight fitness freak.

With the training plans, nutritional insight and one on one guidance and accountability that came from Jed's programme I quickly started to see results and as a result a few months down the line I'm in a much better shape both physically and mentally. The poor posture and beer belly kench that has been jokingly pointed out for the majority of my adult life is now all but gone (or greatly reduced) and I'm fitter and stronger than I've ever been. All it took was hard work and a few tweaks to my diet and daily routine, no stupid fad diets, cleanses, fasting etc basically no bullshit. I still enjoy a beer or 10 although generally only at weekends these days, I eat a lot cleaner and I make the effort to train at least 3/4 times a week.

There's literally no excuse not to do it, if I can then anyone can. If you're like me and don't know where to start or need a push in the right direction then speak to Jed. He has clients in both England and Australia following his programme and his track record is proven and second to none, for the minimal cost involved it's real value for money. Stop sitting around doing fuck all and get it done, it'll be the best thing you ever do!"

WordPress is an award-winning web software, used by millions of webmasters worldwide for building their website or blog. SiteGround is proud to host this particular WordPress installation and provide users with multiple resources to facilitate the management of their WP websites:

SiteGround provides superior WordPress hosting focused on speed, security and customer service. We take care of WordPress sites security with unique server-level customizations, WP auto-updates, and daily backups. We make them faster by regularly upgrading our hardware, offering free CDN with Railgun and developing our SuperCacher that speeds sites up to 100 times! And last but not least, we provide real WordPress help 24/7! Learn more about SiteGround WordPress hosting

WordPress is considered an easy to work with software. Yet, if you are a beginner you might need some help, or you might be looking for tweaks that do not come naturally even to more advanced users. SiteGround WordPress tutorial includes installation and theme change instructions, management of WordPress plugins, manual upgrade and backup creation, and more. If you are looking for a more rare setup or modification, you may visit SiteGround Knowledgebase.

SiteGround experts not only develop various solutions for WordPress sites, but also create unique designs that you could download for free. SiteGround WordPress themes are easy to customize for the particular use of the webmaster.

Any cookies that may not be particularly necessary for the website to function and is used specifically to collect user personal data via analytics, ads, other embedded contents are termed as non-necessary cookies. It is mandatory to procure user consent prior to running these cookies on your website.